Chainsaws are some of the most versatile tools that money can buy. And, if you’re in the market for a heavy-duty one, you might be comparing what several different companies have to offer. Here's our showdown of the best midrange chainsaws in Husqvarna vs. Echo.

In this piece, we’ll take a look at two of the biggest and baddest chainsaws out there: the Husqvarna 460 Rancher​ and the ECHO CS-590 Timber Wolf​

Husqvarna is the world’s largest producer of outdoor power products and their line is diverse. From chainsaws for loggers to a robotic lawnmower, you can find almost anything that you could possibly need from this Swedish company. The company has been in business since 1689, but chainsaws were introduced to its product line in 1959 as logging and forestry became increasingly important in Sweden.

Compared to Husqvarna, ECHO is a young company. It was originally founded in Northbrook, Illinois in 1972 as part of the Kioritz Corporation of America, but became ECHO just a few years later. It introduced chainsaws as part of its product line soon after it began and it has been a major part of ECHO’s product line ever since. Today it’s owned by the Yamabiko Corporation, a Japanese power tool company.

Both companies have a history of craftsmanship and durability, but Husqvarna’s reputation is hard to beat. Husqvarna chainsaws are one of the top options out there, and they compete with Stihl for the most popular tool amongst loggers. They’re particularly well-known for the sturdiness of their machines and their long-lasting durability.

The Husqvarna 460 Rancher  and the ECHO CS-590 Timber Wolf are two heavy-duty chainsaws that are guaranteed to get the job done. These are not tools for anyone who is inexperienced, and if you have never operated a chainsaw before, we wouldn’t recommend one of these as your first purchase.

The Rancher and the Timber Wolf are both suitable for activities that require a lot of power. They are professional tools that are used by loggers and landscapers across the world and they’re designed to tackle trees quickly and effectively.

While both serve the same essential purpose, there are a few major differences to highlight between the two. In this article, we focus on a few key points: safety, engine and power, and durability.

Husqvarna is perhaps most famous for its chainsaws, which have inspired brand loyalists around the world. And it’s easy to see why with the Rancher series. The company uses a ton of proprietary technology to make these chainsaws safe, and its 60cc engine ensures that it can get almost any job done. 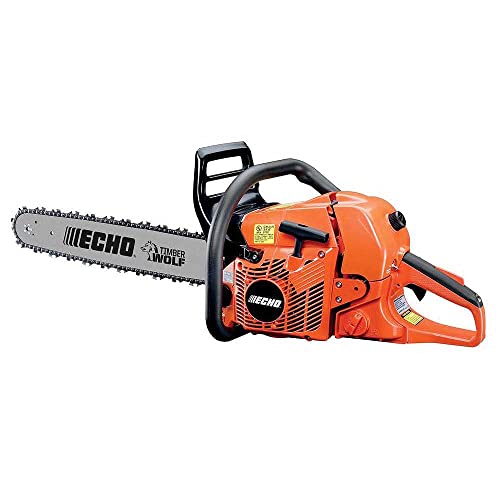 Echo chainsaws are also heavy duty machines with many brand loyalists. With a 59.8cc engine it is comparable to the Husqvarna. This heavy duty piece is known for being easy to use while still retaining significant power.

When buying a chainsaw, there are multiple things that you should consider before pulling out your wallet. If you’re choosing between the Husqvarna Rancher and the ECHO Timberwolf, you might want to think about the following:

Chainsaws are undoubtedly one of the most dangerous tools out there, so it’s understandable that safety is something you’re concerned about.

While proper lubrication and proper care are two easy ways to help reduce the number of accidents, there are a couple of other features that should come pre-installed.

The first of these is a chain brake, which automatically stops the chain when it experiences a sudden movement or impact.

So, if you drop the chainsaw or hit an unexpected hard spot on a tree, you know that the chain will stop before someone can get seriously hurt.

Both Husqvarna and ECHO have these installed, a factor that is unsurprising.

The second safety feature that we compared was the noise and vibration dampeners.

Anti-vibration features are extremely important when it comes to using a chainsaw. Without them, the machine can get dangerous quickly, especially over a long period of use.

Constant vibration over time can seriously impact your body, leading to disorders like “vibration white finger” among others. These vibration dampeners also help reduce the amount of noise that the chainsaw produces, something that can have long-lasting effects on your health.

Both the Rancher and the Timber Wolf have vibration dampeners, but in this category, we have to hand the win to Husqvarna because of its proprietary LowVib® system.

This system gives an equivalent vibration on the front handle of 3.8 meters per second squared (m/s2) and 6.9 m/s2 on the back handle.

ECHO does not publish their vibration ratings like Husqvarna, making it a little bit more difficult to judge how effective its dampeners are.

While it’s safe to assume that ECHO’s dampeners are rated well and help protect against workplace injuries, Husqvarna’s transparency gives us peace of mind.

The Husqvarna Rancher contains a 60cc two-stroke gas-oil engine, which gives it a high power-to-weight ratio.

A two-stroke engine has fewer moving parts, thus making it lighter and more efficient than the three-stroke options that are available.

Husqvarna’s engines all use their patented X-TORQ® technology to reduce exhaust emission levels and make the machine more energy efficient.

This means there will be fewer refills needed and can increase your productivity.

The ECHO Timber Wolf also has a two-stroke gas-oil engine, which, in theory, should give it a high power-to-weight ratio.

However, with a slightly smaller 59.8cc tank and a heavier body, it’s beaten by Husqvarna in that regard.

It is also not as fuel efficient as the Husqvarna, though the company does have a large commitment to environmental conservation and sustainability.

If you’re going to spend good money on a chainsaw, you want to know that it is going to last you a long time.

Luckily, there are some built-in mechanics to help ensure the longevity of your machine.

One of these features is an automatic oiling system. This not only helps keep your chain lubricated to ensure a smoother cut, but it also prevents corrosion and rust from building up on the blade.

An automatic oiler ensures an even application to the chain during the process and reduces the number of breaks that you need to take to apply the lubricant.

Another durability feature that you should be searching for is an air cleaning system. This is a simple but ingenious way of protecting your air filter.

In short, this system helps prevent large pieces of debris from even reaching your air filter in the first place, reducing the damage that’s caused to the filter as well as the frequency that you have to change it.

Both the Husqvarna Rancher and the ECHO Timber Wolf have each of these features, ensuring that your saw will last for a while.

They both have automatically adjustable oilers that allow you to choose how much oil the chain receives while also taking the work out of reapplying the lubricant.

And in addition to the air cleaning systems, they both have easy-access air filters so that when you do need to change it, you can get the job done quickly.

Overall, both of these chainsaws are great options. However, because of the added features and reputation for durability, we would choose the Husqvarna Rancher 460 over the ECHO Timber Wolf.