A lot of people have a favorite tool, one they can’t part with. Some folks favor a specific brand. Craftsman falls in the latter. One reason folks went to Sears was to buy Craftsman tools. They had a good reputation and a lifetime warranty.

Then news came in 2017 that Sears had sold Craftsman to Black and Decker. This led tool owners to wonder where they would find replacement parts for their 12-inch Craftsman Band Saws. Are Craftsman Band Saw parts no longer available? What about Craftsman Band Saw Blades—can you find them somewhere else? Are you questioning what kind of saw you need? Check out these great guides for more information! Scroll Saw vs Band Saw – The Showdown and Band Saw vs. Table Saw – Which One Do Woodworkers Need First?

Good questions all. Before you panic, here’s what we discovered from our investigation.

Can You Still Find Band Saws at Sears?

A search of Sears’ website for Band Saws brings up the following sold directly by them:

A second search of what they call the Marketplace—links to products sold elsewhere—brings up over 200 items. There the brands include

We thought we hit the jackpot when we found a Sears Hometown Store. We found a 14-inch Craftsman BAS350 picture. However, no matter what zip code we entered, the site told us this item was not for sale there either.

Can a Craftsman Band Saw be Bought Used?

Buying used tools requires a little searching and sometimes a little ingenuity. Check places such as eBay and Craig’s List. Ask around at woodworking stores or search auction websites or local auctions.

Bid Spotter is one such on-line tool auction site. At the time of writing, it had several Craftsman woodworking tools, but not the band saw. However, that could change. You can visit the Bid Spotter website here.

Can Parts for a Craftsman 12-inch Band Saw Still Be Bought?

Before you buy a used tool, you want to know if  you can still find parts.

Between these sources and talking to other Craftsman owners, you should be able to find most parts that you need or be able to substitute other parts.

If you decide against buying the Craftsman or if you can’t find one to buy, here’s an alternative you might consider. Craftsman was considered a mid-range machine, so we compared machines similar machines. 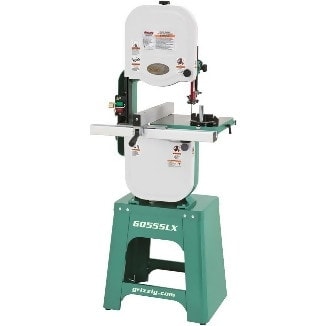 This band saw, which can be bought for around $600, has received many positive reviews. It is an upgrade from the G0555LX. We think the extra features are worth it. The specs are typically for a machine this size—1 HP motor, 14 by 14 inch table, table tilts 45 degrees, cutting capacity of 13 ½ inches, and a maximum height of 6 inches.

This is a solid Band Saw that either matches or outperforms the Craftsman. Although the company is only 30 years old, it has spent considerable money on quality-control. It also moved its quality control office overseas so that they can monitor the quality at the factories where the products are made. It is available from the company itself here.

The History of Craftsman Tools

Craftsman Tools are among the most well-known and popular tool brands in America. In 2001 people ranked Craftsman tools as number one in quality according to one survey. Another survey in 2007 found Craftsman rated number one for “brand expectations” and “trust.” Readers of Popular Mechanics named Craftsman their favorite tool in 2009.

The brand has a long history that is intertwined with the history of Sears. Because Sears wanted to be the store where you could buy everything, they started selling Craftsman tools in 1927. As you can see from this timeline, this continued to be the company’s goal:

What Happened to the Guarantee?

When Craftsman tools, such as wrenches, screwdrivers, drills, hammers, were sold by Sears they came with a lifetime guarantee. This guarantee became one of the Craftsman’s main selling points. You didn’t need a receipt, either. Walk in, hand over the broken tool, and Sears would replace it.

When Craftsman was sold to Black and Decker, the tools would be sold at Lowes and some Ace Hardware stores. Folks wondered if Lowes would honor the warranty?

According to their website, if they can replace the tool with an identical model then yes. The problem is, the Craftsman tools they sell are not identical to the ones you bought ten years ago. They will instead direct you to the Craftsman online site.

When Sears announced they were selling Craftsman tools, it sounded like a death knell for the chain. Folks went to Sears for the tools and appliances, and one of those was gone. It was only a matter of time until Kenmore was also phased out. Are you looking for a Ryobi band saw? If so, check out The Best Ryobi Band Saw 2019: Which One Should You Purchase?

You are now armed with enough information to decide if you want to buy that Craftsman Band Saw or invest in a newer one, such as the Grizzly. The rest is up to you. Do you need a band saw that cuts metal? Check out our guide Metal Band Saw – Who Makes the Best?