Home / Blog / Tools / Ryobi vs. Milwaukee – How Does The Ryobi Super Combo Kit Stack Up?

OK, so you’re looking for some high-quality tools, right? So, what do you choose? Well, if you’ve narrowed your options down to Ryobi vs. Milwaukee then you’re in the right place because that’s exactly what we’ve done and now we’re going to help you get the right one.

Founded in 1943, Ryobi was first engaged in die castings and didn’t get listed for stock until 1961. Today, they’re involved in a whole lot more and have created a much larger company that’s responsible for plenty of tools produced and sold throughout different parts of the world. You’re going to find a whole lot of great things to really like about Ryobi and reasons that their products are going to be the best option for you.

​Of course, another great option is Milwaukee, which has been making tools in some capacity since the 1920s, though the company shuttered its doors in 1923 and didn’t come back until 1924 when it was officially the Milwaukee Electric company. They didn’t make any of their own tools at first, simply repairing ones that were already worn out. Today, however, they make their own tools and they’ve expanded their business to cover a range of different countries with plants and products. 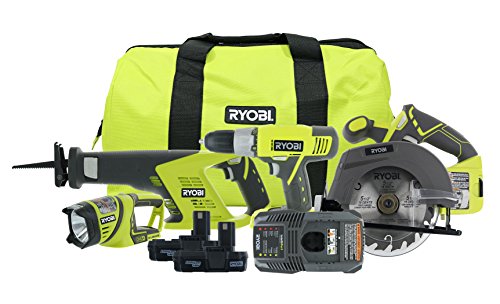 Let’s start out with the Ryobi Super Combo Kit. You’re getting a great price because this set is priced right around the moderate level for the size kit you’re getting. You’ll also get a reciprocating saw, circular saw, work light, and drill alongside the two batteries, charger, and bag to carry it all around with you. There’s no reason to sacrifice anything because this system is definitely going to get you a great variety of use. 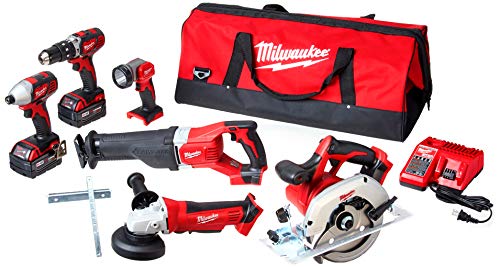 ​Next up is the Milwaukee Combo Kit, which offers six total tools including a hammer driver, a driver drill, a reciprocating saw, a circular saw, and a grinder along with the flashlight, two batteries, a charger, and a bag for everything. That means you’re definitely getting power and you’re getting even more versatile tools than you’ll get with the Ryobi option. It’s powered by an 18-volt system, so there’s plenty of power as well, so you’re not missing out.

Now it’s time to take a look at how these two sets are really going to stack up when it comes to each other. You want to make sure that you’re getting great quality and some great features after all, right?

First up, is the amount of power that they’re going to offer. With the Milwaukee set, you’ll actually get 18 volts, which is going to be enough to get just about any job done.

The system also has two batteries, which means you’re going to get the power you need for as long as you need.

Whether you want to use the batteries one after the other for one project or put them into two different tools to use at the same time, you’ll have plenty of power.

The Ryobi set gives you the same 18 volts, which is going to be enough to get just about anything you want to get finished. Not only that but you’re getting a system with fade-free power, so you don’t have to worry about it starting to slow down when the battery gets a little less than ideal.

With two different batteries, you have the same options as with the Milwaukee and you’ll have enough time with the battery to get the job done.

We can’t talk about buying anything without talking about the price that you’re going to pay for it. The Ryobi set is actually at the lower end of moderate for most toolkits.

On the other hand, the Milwaukee set is going to be quite a bit more money.

It’s worth pointing out that you’re getting several more tools with the Milwaukee set than you are with the Ryobi, so make sure you take that into account when you’re deciding what you’re going to spend the money on.

There are six pieces to the Milwaukee tool set, which include a hammer driver, a driver drill, a circular saw, a reciprocating saw, a grinder and a flashlight.

You’re going to have a whole lot to work with and you’ll be able to complete just about any project that you have with the variety you’re getting here.

When it comes to the Ryobi set, you’re going to get four different tools, which include a circular saw, reciprocating saw, a flashlight, and a driver drill.

That means you’re still going to have a decent amount of capabilities for the tools, but you’re just not getting quite as much variety as you are with the Milwaukee.

That’s definitely something to think about when you’re looking at which one to buy.

Milwaukee offers a 5-year warranty, which is actually at the higher end of the standard that you’ll find with most products.

That means you’re getting a great warranty that’s better than what Ryobi offers and better than a lot of other companies as well, which is something to keep in mind.

Ryobi offers a 2-year limited warranty on all of their products, which means you’re getting something right about average for the majority of tool manufacturers.

That means it’s not quite as good as you might like, but it’s also not going to be too bad and means they stand behind their products.

So, which one is it that you should be going with? If you have the money, Milwaukee is definitely offering a few more options in the way of products (you get a couple extras) and you’re going to get a better warranty.

You’re getting the same amount of power too, but it’s up to you whether that amount of money extra is really worth it. If you can’t afford the extra, you’re going to have some great features and abilities with the Ryobi still.