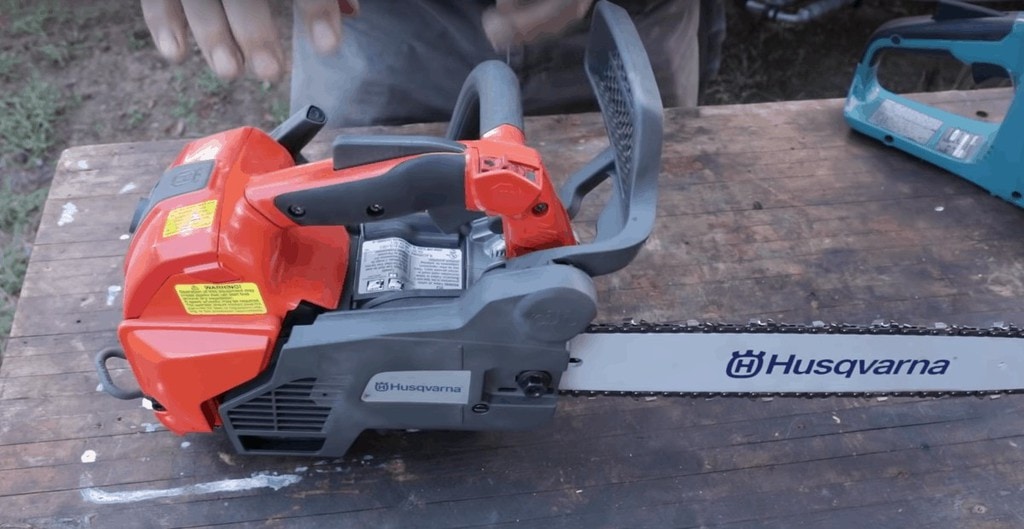 ​Whether you’re doing a little trimming of your elms to keep the branches from creeping into the eaves or felling an old walnut and processing it down for firewood, a chainsaw is an invaluable tool to have available in your arsenal. For the everyday homeowner, they are unmatched in versatility, cutting speed, and raw power.

Some chainsaws are better suited for tackling big cutting jobs like felling or bucking large trees and others are more maneuverable for the finer tasks of pruning and trimming. All the saws on our list are in the neighborhood of 45 cc’s. That gives them plenty of power, without being too aggressive, and keeps them light enough for the typical homeowner to use in many positions and for extended periods of time.

When it comes to the biggest and hardest jobs you can ask a chainsaw to do there is still no replacement for displacement. Gas-powered chainsaws simply offer more in terms of cutting power and speed, run time, and mobility than corded electric or battery-operated can hope to provide. That may change as technology catches up, but for now gas is still the king of the hill.

With electric or battery-operated you will have to sacrifice either mobility or run time, whereas with gas you can have both. The main drawbacks to gas are they can be difficult to start and they require more maintenance.

Chainsaw manufacturers have come a long way with the science of starting a chainsaw. They’ve come so far in fact, that firing up a gas chainsaw is largely becoming a non-issue. Some of the chainsaws on this list start almost as easily as a battery-operated or electric chainsaw. This leaves only the extra maintenance a gas chainsaw requires as a significant hurdle and given the nature of small engines, those tasks are difficult to avoid.

But again, manufacturers have worked to make these things more convenient such as with quick-access clips to the air filter or saws that automatically adjust their timing. But if you have big cutting jobs to tackle, there will be little ones that still need doing along with them.

Operating a chainsaw can be rewarding but is a big responsibility and one you don’t want to take lightly. Kickback is something you want to be especially aware of given the significant power these gas saws possess.

Kickback on a chainsaw can occur one of two ways. The first is if the chain gets pinched between the material it’s cutting and causes the saw to drive backward into the handler.

The second way is if the tip of the bar comes into contact with something. This is the more dangerous form of kickback. Because all the torque from the chain suddenly stopping gets transferred to the body of the chainsaw, the chainsaw wants to flip back at the saw handler, presumably with the throttle still held down.

You can’t rely on your cat-like reflexes to stop the saw as it simply happens too quickly. This is where the chain brake becomes a life saver. The chain brake will disengage the chain almost instantly when triggered.

Many saws have a manual chain brake which makes the left handguard a lever. This style requires your hand be positioned in order to hit the lever during a kickback. But if your hand is out of position, nothing will trigger the chain brake.

All the saws on this list also have an inertia chain brake built-in to engage the chain brake automatically when the saw moves in a quick, snappy motion, such as during kickback. This is superior because you are not required to hit the lever with any part of your body. If your hand is out of position to hit the lever, such as on the side of the left handle, the brake will still activate.

All the saws reviewed also have a vibration reduction system. A vibration reduction system will keep your hands and arms from going numb while operating a saw for an extended time. If your hands go numb, you can’t hold onto the saw as well which can spell big trouble. This is especially important with such powerful saws running at high RPMs while ripping through wood. 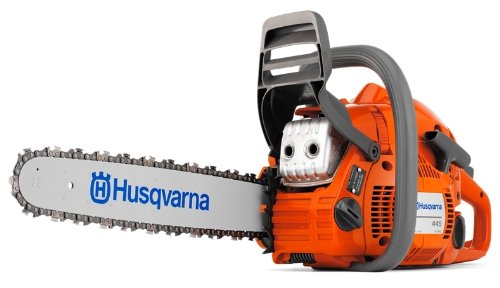 Husqvarna is a well-known and well-respected brand with a history of excellent chainsaws and the 445 is no different in this regard. Even with such strong brand recognition, the 445 comes in near the bottom of the price range of these saws. It’s a great performing chainsaw all around and gets you professional quality at a reasonable price.

In addition to having power and maneuverability, the 445 is loaded with quality-of-life features. The chain tensioner is side access and the fuel level can be visibly seen through a clear gauge. Getting the 445 going is made easier with the Smart Start system and an air purge to make starting easier yet. The 445 also has felling marks on the casing and a quick-release air filter.

The complaints about the 445 centered around the actual ease of starting the chainsaw. Even among positive reviews, owners complained it could be difficult to start, sometimes taking upwards of 20 pulls to kick on. Others maintained that if you just follow Husqvarna’s instructions for starting the chainsaw, it was no problem.

Stihl, like Husqvarna, has an amazing reputation among chainsaw manufacturers and the MS 251 C-BE is stout. It creates 2.95 hp from a 45.6 cc engine and will accept either a 16 or 18-inch bar. Of all these saws, it’s the heaviest weighing 11.9 pounds. However, that is still a very manageable weight and gives the Stihl a sturdy feel.

The MS 251 C-BE uses a spring assisted system called Easy2Start to help you get it fired up, if you follow the instructions as provided. Although some said the Stihl started easily, many said Easy2Start appeared to be too generous with fuel and caused the saw to flood easily.

Comfort and ease of use are where the MS 251 C-BE really excelled. The vibration reduction system is by all accounts top notch which your hands and arms will thank you for. To the left of the rear grip is the Master Control Lever which is a single, multi-setting switch that includes the choke, throttle lock, and on/off operation.

The 251 was the only saw with a tool-less chain tensioner known as the Quick Chain Adjuster. The QCA sits flush on the side of the saw until you need to use it. Then you pop it up, wind the chain, and snap it back down. It’s incredibly quick and efficient but it’s also plastic. Over time this part may become brittle and snap off. Although, to be fair, no one has mentioned it happening so far.

The Stihl MS 251 C-BE was the most expensive chainsaw of the group and it seems reasonable when naysayers argue you could get a similar product at a significantly lower cost, but those who chose the Stihl were overwhelmingly pleased with their purchase. The Jonsered CS 2245 was the lowest cost chainsaw but still a favorite. The CS2245 runs in bar lengths from 13 inches up to 18 inches and weighs just 10.8 lbs. It’s powered by a 45.7 cc 2.8 hp engine using the Clean Power engine design to give you that power at 75% lower emissions and 20% increased fuel efficiency.

A turbo intake air cleaning system removes 97% of the sawdust before the air filter which keeps the saw from starving for oxygen and performing at full tilt.

The CS 2245 has a side mounted chain tensioner and a clear fuel gauge. It’s also known to have excellent vibration reduction and a great oiling system. The oiling system may be the reason many users stated this saw refused to bog down even in ambitious cuts. Plenty of lubrication and a powerful saw help make for quick work.

The only real complaint on this saw was the choke can be difficult to adjust and takes quite a bit of getting used to. Overall, the CS 2245 is a great saw with a great reputation that won’t disappoint. 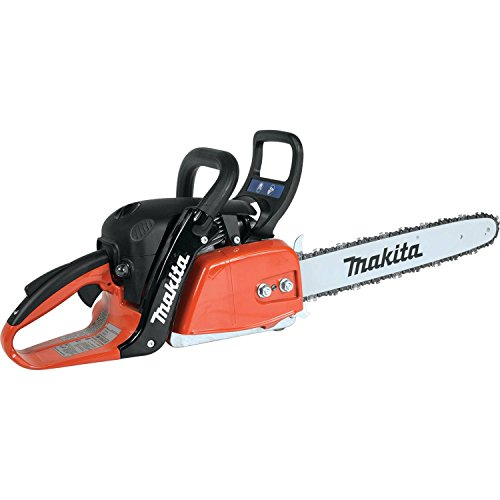 This is the smallest of all the saws at 42 cc but punches well above its weight class at 3.0 hp. It weighs 10.8 lbs only comes in a 16-inch bar and that could be a deal breaker for some who need their saw to perform larger jobs.

Like many of the other saws, it has side access chain tensioning, vibration reduction, and an automatic oiler which is disabled at idle. The EA4300FRDB also has a magnesium crankcase housing which is lighter and more durable than aluminum.

The Dolmar PS-421 and now the Makita EA4300FRDB is famous for being ridiculously easy to start, especially after it is warm. Makita credits this to the Easy Start spring assisted design coupled with their optimized engine management.

The only complaint I could find on this saw was that the trigger safety was fussy and prone to tripping and locking out the trigger. 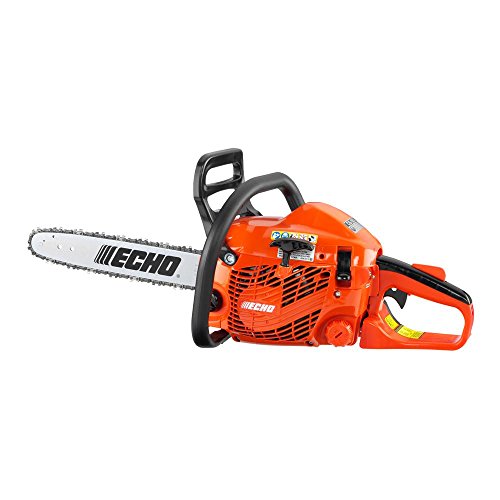 The ECHO CS-450 comes in close to the top of the price range but does a solid job of justifying the extra money spent on it. To begin with, it can accept bar lengths from 16 to 20 inches which makes it plenty of saw for even large jobs. The powerful 45 cc engine will give enough grunt to the chain to get those jobs done too.

It comes with some features seen before: a side-access tensioner, inertia chain brake, automatic oiler, and a vibration reduction system but one thing it has that others did not is an automotive style air filter and engine pre-cleaner. The CS-450 also includes a digital ignition to automatically adjust the engine timing for better performance. This saw runs like a finely tuned instrument.

The engine also carries the highest EPA certification for durability available and ECHO backs this saw with an incredible 5-year consumer warranty. This saw was intended to last. Users echo this sentiment as many have indicated this saw is durable and holds up to serious abuse.

The few complaints that existed were about the quality of the case which was mostly plastic and there were several owners who had issues with the factory bar either bending or seizing up.

Picking the right chainsaw is as much about price as it is about your personal needs, habits, preferences, experience, and even your fitness level. So, it’s extremely important you be honest with yourself when making a choice.

Each of the saws listed is going to be an amazing pick. They are all great saws produced by great companies with a reputation for excellence. Assess your needs and personal habits, and tailor the saw to fit yourself. Then enjoy throwing some dust.