There are several factors to consider when building a goat fence, including the functionality, cost, appearance and landscape.

The answer to "how to build a goat" fence is really more about which kind of fence you want to put up - as the 2 major types are quite different and would require very different steps to install.

The cost of putting up and maintaining the fence is, however, the major limiting factor in most cases.

A goat producer therefore needs to plan to build the type of structure that falls within their budgetary constraints, while performing the task effectively.

The two types of field fences include the physical barrier fence and the mental barrier which is a psychological barrier due to the natural reaction of the animal to electricity. In the latter case, the animal associates the fence with a negative stimulus and learns to stay away from it.

The video below by Brian Freking shows both barriers and explains more about the benefits of each type of goat fence:

The welded type of fencing acts primarily as a physical barrier. It is therefore designed to withstand pressure from moving and climbing goats. One ought to be specific when choosing this type of fencing for goats, since goats are naturally browsers. Each square mesh is made by welding a pair of interlinking vertical and horizontal wires together to form a rigid structure.

Since goats like to climb, the rigid structure is key to keeping your fence upright and looking nice. If not, goats can quickly damage a fence that isn't rigid enough. 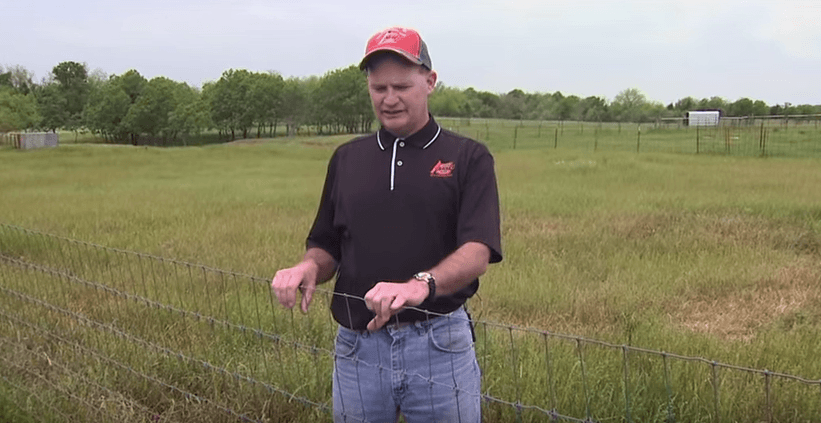 Goat fences of this kind have smaller squares as compared to cattle fences. This is necessary in order to prevent the goats from getting their horns and consequently their heads stuck. If a cattle fence is used instead, the goat could easily penetrate the mesh using its horns, putting itself in danger of suffocation.

This is usually encountered by producers who keep both cattle and goats.

This would pose a problem for the producer since the only remedy for freeing their heads would be to cut the wire, which would reduce the life of the fence considerably.

As a result, the manufacturer or retailer should be contacted on the availability of the type of fence with smaller meshes or asked to advise on the type of mesh to use for goat fencing.

Electric fencing is another alternative involving the use of electric current of about 6000V on the wires to control movement of goats. The method is flexible as it offers room for expansion by allowing the posts to be spaced out further to fit your needs. This would be quite expensive to implement if a welded fence was the preceding choice of fencing.

When opting for electric fencing, a thicker wire is advisable as it offers less resistance, and thus greater shock when the goat comes in contact. One way to identify thick wires is by the gauge number; lower numbers have thicker wires.

Another way of maintaining a steady high current is by ensuring less vegetation in contact with the bottom wires, since wet grass tampers with the strength of the current.

It is important to protect the energizer from lightning strikes, since replacing it is expensive.

A conductor can be fixed to the energizer at a little extra cost to ensure longevity and firm grounding. A voltmeter is used to determine the amount of current in the circuit in order to diagnose any malfunctions and monitor possible fluctuations in the fence. This saves time and energy that would have otherwise been used to correct the irregularity.

For example, given a 6-joule unit and about 5 miles of fence, the number of miles of fence that you can possibly build is given by the product of the two.

Ground rods ensure that electricity circulates back to the energizer through the ground. If ignored, this could contribute to weak shocks which would then fail to deter the goats from moving outside the allocated area. Few ground rods also makes the electricity flow vulnerable to fluctuations during the dry season.

Ultimately, the choice of fence depends on the available resources. Electric fences tend to be cheaper to build, if cost is a driving issue for you.