Home / Blog / Tool vs Tool / Leatherman vs. Swiss Army Knife: Which is the Best Multi-Tool?

Multi-tools are like the utility man in baseball - there to be useful for any situation that might arise. They might not be the first-choice or preferred option, but they’ll be effective no matter what you ask them to do. (We’ll consider Ben Zobrist the Leatherman of Major League Baseball, then).

While there’s plenty of manufacturers out there currently designing quality, well-made products, the bout for multi-tool champion of the world ultimately comes down to the two major heavyweights: Swiss Army Knife vs. Leatherman.

If you’ve ever owned either of the two, you know that they’re both superior quality instruments.

However, like anything, they’ve each got their own specific intricacies, strengths and weaknesses, and subtle design differences. In this article, we’ll take an in-depth look at each one - if you’ve been in the market for a quality multi-tool and have been trying to decide on one brand or the other, read on to help determine which one might be best for you and your needs.

Since both Leatherman and Swiss Army Knife (Victorinox) each have dozens of different models to choose from, we’ll focus the article on three main products: small (mini), standard, and full-size multi-tools. The three sizes are also relative in price, ranging from budget (mini), to top-of-the-line (full-size).

Before we jump into the head-to-head comparisons, let’s have a short look at each company's’ history - you’ll probably find that both are legitimate, cool, authentic brands that boast unique and intriguing backgrounds. 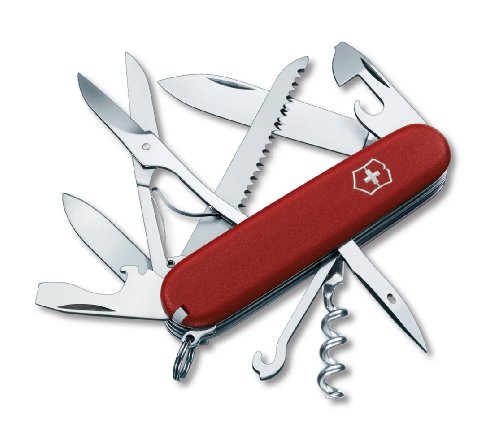 The Leatherman brand started in 1983 out of Portland, Oregon. The company’s founder, Tim Leatherman, was an engineering student and tinker-holic who decided he needed a quality, one-tool-does-all type instrument for his budget world traveling adventures.

He initially wanted to base the multi-tool off of a pair of pliers, which he believed to be the single most advantageous tool one could have while on the road. To this day, all Leatherman multi-tools are still plier-based, and still made in the USA at the original Oregon manufacturing facility.

The term ‘Swiss Army Knife’ is actually a broad, vague term referring to the popular knives and multi-tools with the iconic Swiss flag logo.

The tools are currently made in Switzerland by Victorinox - the same, original brand founded by Karl Elsener that was contracted in the late 19th century by the Swiss Army, to manufacture standard-issue knives to Swiss soldiers. The brand became popular in the U.S. around the 1940’s, when American World War II soldiers brought them back from overseas.

Both companies have remained true to their roots, and still manufacture all their products in Oregon and Switzerland, respectively.

In the regard of overall aesthetic appeal - how each tool looks and feels in the hand - we’ve got to say we much prefer the Leatherman brand. There’s something about the boxy, rock-solid all-metal design that just feels right. Also, we get the feeling that they would be absolutely bomb-proof, and able to structurally survive just about everything.

This isn’t to say anything bad about the design or construction of Swiss Army Knives, though. Things like looks and aesthetics are subjective and purely opinion-based; surely there are people out there that much prefer the sleeker, rounded-off design of the Swiss Army Knives over Leatherman’s more industrial approach.

Like we said, we’ll take a look at three different tools in this article: a small, standard, and full-size example from each brand.

For miniature tools, which are fantastic gifts or great first-time knives to give to young ones, Swiss Army has several different options,  the Camper II, Spartan II, Climber II, and Sportsman II.

They’re all fairly similar, and all have two standard blades (large and small), a bottle opener, corkscrew, reamer/punch, can opener, flathead screwdriver (small and large), wire stripper, tweezers, and toothpick. The Spartan and Sportsman II are the most basic of the bunch, while the Climber II comes with scissors and a multi-purpose hook that can hold up to 200lbs.

The Camper II substitutes a wood saw for the scissors. In our experience, the scissors on Swiss Army Knives are borderline useless, so we’d recommend going with the Camper if you’re deciding between the two.

Leatherman’s mini option is the Micra multi-tool, which is priced very competitively. It features a pair of spring action scissors instead of the pliers that are standard on the larger models. Unlike the Swiss Army Knife scissors, the ones on the Micra are actually incredibly functional - great for clipping fishing line, threads, small rope, twigs/vines, etc. The tool also features a knife blade (obviously), phillips/flathead screwdriver, medium and extra-small screwdriver (which can also act as a ream), nail cleaner, bottle opener, tweezers, and ruler.

Every Leatherman knife blade and tool is constructed with heat-treated, 420 high-carbon stainless steel.

For mini/budget-priced multi-tools, we hands-down prefer the Leatherman Micra. It just feels better, is smaller, seems to be better constructed, and is more functional.

Not to mention, those scissors really are the real deal. The only reason we’d go with one of the Swiss Army options is maybe as a gift for a young kid, as they usually get excited to own one of the popular, iconic red-and-white tools.

The Huntsman II is a combination of all the micro-sized Swiss Army Knives - it contains all the standard tools, as well as the multi-purpose hook, the wood saw, and the scissors.

We don’t really see the justification of nearly double the price of the smaller sized tools. Unless of course you’re just in desperate need of all the tools in one. Keep in mind, though, what we said about those Swiss Army Knife scissors.

The Sidekick by Leatherman, on the other hand, fully merits the jump in price from the smaller Micra tool in our opinion. This mid-range, standard size tool features the legendary Leatherman pliers as the focal point (with replaceable wire cutters), as well as 16 other tools including a blade, wood saw, phillips and flathead screwdrivers, a file, electrical crimp, and ream/prick/bottle opener. In our mind, the best standard-sized multi-tool on the planet.

Again, the top-notch design, feel, and overall quality of each tool in the Leatherman trumps those of the Swiss Army Huntsman, in our opinion. If we had to choose a single multi-tool to have for the rest of our lives, we’d choose the Sidekick and pay three times more for it than the Huntsman, if we had too - even though they’re both priced similarly. (In fact, the Leatherman is actually a bit cheaper than the Huntsman at MSRP).

These are the ones with all the bells and whistles. The Champion Plus from Victorinox is the cheaper option, while the Super Tool 300 from Leatherman is a bit more expensive.

Is the Leatherman worth a jump in price over the Swiss Army Knife? In our opinion, without a doubt. The fact is, if you’re legitimately in the market for a top-of-the-line multi-tool, you’re likely willing to splash a little cash to get the best one out there. And in our opinion the Super Tool 300 is the best, hands down.

Again, though, this isn’t to say anything bad at all about the Swiss Army Knife - it is a superb, excellent quality tool. However, like the micro and mid-range sizes, we just think the Leatherman is the better option overall. We think the tools perform better, they feel more rock-solid, and we just prefer the overall aesthetics more.

So obviously, it’s quite clear that we prefer Leatherman multi-tools over all the different size ranges. Except for the full-size tools, prices between the two brands are pretty similar, and both come with lifetime warranties. Also, we love the fact that Leatherman products are still constructed right here in the U.S., in the same town where the company was founded.

We’re really trying to rack our brains to come up with a feature or situation that the Swiss Army Knife would be superior in, but we’re drawing a bit of a blank.

Maybe if you got a kernel of popcorn in your teeth and really, really needed a toothpick?