The JawHorse by Rockwell and the Super Jaws by Triton are nearly identical tools; both are hands-free, heavy duty clamping devices that can function in an endless variety of different ways.

We’ll go ahead and be straightforward here: we’ve used and tested both of these tools, and both are awesome products. We have zero reservations whatsoever about recommending either one of them.

That being said, a review wouldn’t be a review without actually talking about some product(s), and there are actually a few subtle differences between the Super Jaws and the Jawhorse that are worth consideration before you go out and decide on one or the other.

In any regard, though, we’ll reiterate the fact that you can’t go wrong with either one of them - if you have the opportunity to add one (or both!) to your tool collection, do it. You’ll legitimately be surprised at how much use you get out of it, and how many different uses you can find for it.

This will probably be one of the shortest reviews we’ve done - the differences between these two tools really are that minimal.

If you’re into such things, the Super Jaws was the original of the two; it was first introduced by Triton in the 1970’s, and the general design has changed little over the decades.

Triton is actually a pretty cool brand; it’s an Australian company that started from scratch in the mid-70’s, when a couple talented engineers designed a world-class, pro-quality portable workstation that became an instant hit in the home-improvement market.

Nowadays, they’ve grown into a worldwide corporation that manufactures a complete range of power tools and portable workstations.

Word is that it’s actually the same team of engineers that design and manufacture the JawHorse as well. That makes sense, as it really is a near carbon-copy of the Super Jaws, apart from a couple aesthetic discrepancies that we’ll talk about below.

At their core, both tools are multi-use vices/clamping devices. And when we say multi-use, we mean multi-use; we’ve used the JawHorse to hold ceiling joists for cross-cutting, clamp carburetors down for re-build, and hold awkward pieces of furniture up for convenient repair and renovation. Also, both clamps work great for setting glued pieces of wood together, and we use the JawHorse all the time as a bicycle stand.

Here’s an awesome little video/infomercial (albeit a bit corny), showing the versatility of the Super Jaws (our favorite part is when the guy uses the clamp pressure to drive a 5” nail into a 2x4). Make no mistake though - the JawHorse can do just as much; here’s proof.

As far as specs, the JawHorse and the Super Jaws are pretty much identical; they both can support a max weight of around 600 lbs, and both have a max clamping force of right around 2,200 lbs (1 ton). That’s genuinely a lot of force; when you clamp something down, it’s not going anywhere.

Both tools also use the same simple, hands-free mechanism to clamp; you simply set the piece down on the tracks, slide the jaw into position, flick the lock switch, and use the foot pedal to apply the clamping force. Incredibly easy, convenient, and user-friendly.

Both tools come in two different sizes: standard, and XXL. The standard sizes have a clamp range of 0 to 36”, while the XXL versions can clamp up to 48” - big enough for full-size 8x4 sheets of plywood.

The standard size JawHorse is a little more beefy than the Super Jaws, and weighs a few pounds more. And actually, it does seem to be a tad more rigid/heavy-duty. That would make sense though if both tools were designed by the same engineers; if the Super Jaws came first, the JawHorse is just a mildly-refined version with different materials and beefed-up construction in key locations.

As far as storage and portability, both the Super Jaws and JawHorse are incredibly simple and convenient to fold up; three simple steps, and the whole thing folds neatly into itself down to the size of about two floor jacks stacked on top of one another.

It’s also convenient to carry, although these are heavy suckers so you probably won’t want to be carrying them too far. (Update: the JawHorse has a wheel that allows you to roll it along while folded up - an awesome design improvement that greatly increases ease of portability).

Like everything else between these two tools, price is nearly identical. Last time we checked, the MSRP of the Super Jaws was a little more expensive, but depending on where you buy from you may very well find sales/deals on either one.

Keep in mind that that these things are so popular and in such high demand, that we’ve often ran into problems trying to find them in stock for customers who have been looking for one.

Amazon really is the best option to pick one up, (unless you want to give your local hardware store a call and see if they stock one or the other), and they very frequently go on sale. 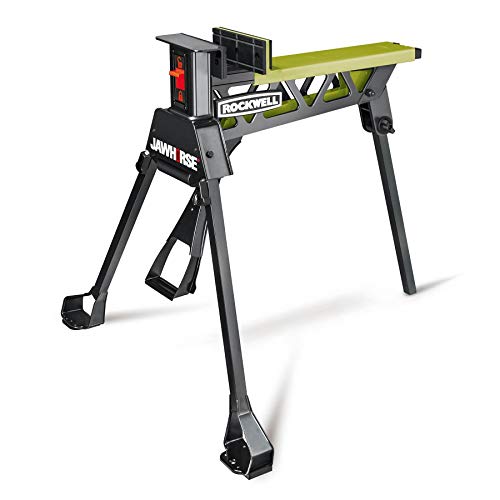 Like we’ve said a few times now, you’ll seriously be blown away by the functionality of both of these tools, and be pleasantly surprised at how much use you’ll get out of them. Standard portable workstations like the Black and Decker Workmate are great, but these clamp-style vices are unrivaled. (For a detailed review of the JawHorse vs. the Workmate table, check out our article here).

So, which one do we recommend between the two?

Oof. We honestly can’t even say - it’s six one, half-dozen the other. The real bottom line is, if you’ve been teetering on the edge of whether or not to purchase one of these things, by all means don’t hesitate to pull the trigger. For their functionality and how many uses you’ll find for them, the price is pretty reasonable.