DEWALT is a power tool company that was both founded in and is based in America. DeWalt is an American worldwide brand of power tools and hand tools for the construction, manufacturing and woodworking. DeWalt is known for its quality cordless drills and accessories, DeWalt tools are Made in USA power tools that nearly always outperform the competition. DeWalt tools set the bar when it comes to portable power tools.

This is a good quality miter saw for the money. If you are just starting out with woodworking and haven’t used a miter saw before, the DEWALT 10-Inch is definitely a great purchase. According to the manufacturer, if you’re cutting baseboards or crown molding, the DEWALT 10-Inch Single-Bevel Compound Miter Saw provides quick, accurate cuts to complete the job. 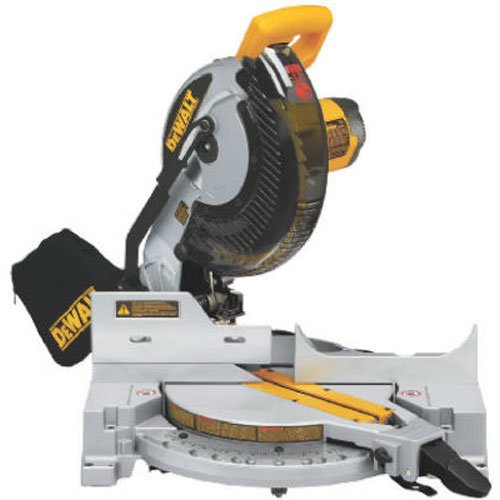 The saw has a powerful motor, an easy-to-adjust cam-lock miter handle, convenient miter and bevel stops, and a tall fence for oversized decorative moldings. The DeWalt has a lower guard that is slightly wider and more stable due to the metal center that makes up almost half of the lower blade guard. Be aware that the discharge shoot for the collection bag goes straight back so you can’t put the miter saw directly against a wall. You’re going to need a bit of space if you decide to use the dust collection bag.

The Best You’ll Ever Use

This will be the best miter saw that you will ever use, and like all DeWalt tools, it will last forever. It has a solid movement and is consistently accurate in its angle cuts once you have done your own calibration with the indicators, which is very easy to do.  this compound miter saw is ready for a range of crosscutting and miter-cutting applications. Unlike some of the competition, the DEWALT 10-Inch Single-Bevel Compound Miter Saw comes with a durable carbide blade, a blade wrench, and a convenient dust bag. All items that you’re going to need in order to complete the job like a pro.